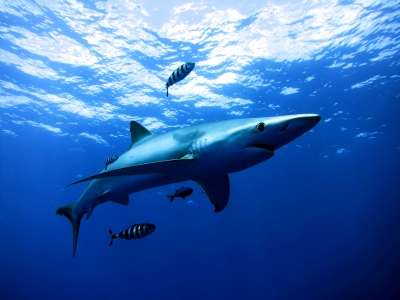 Background
The Mediterranean blue shark (Prionace glauca) population has been categorized by IUCN as "vulnerable" and, according to Ferretti et al. (2008), blue shark (BS) populations have been subjected to a 96% decline in abundance and 99% in biomass over the last 50 years. Tagging studies outside the Mediterranean demonstrated extensive individual movements, considering BS among the most high-migratory shark species. BS distribution in the Mediterranean Sea is significantly related to environmental cues with a strong longitudinal constituent in the presence of BS (the probability increasing from east to west). So far genetic studies carried out in the world oceans revealed an interoceanic genetic structuring with gene-flow generally restricted within ocean. The connectivity of the Mediterranean BS with the global populations still remains unclear since there are no data from tagging and/or genetic studies. Conservation and management of this resource requires a deeper knowledge in order to promote appropriate conservation policies.
Project objectives
The main idea behind this initiative is to contribute new unprecedented knowledge on BS by creating a robust baseline of data describing the genetic stratification of BS in the Mediterranean. The approach would shed light on aspects related to their population structure, the connection to non-Mediterranean populations, and help to design management schemes in order to strengthen conservation efforts for BS. The key objective is to scrutinize the prevailing assumption that Mediterranean BS form only one population, or one "stock". As outlined above meeting this objective will provide a scientific basis for managing the stock(s). Obviously, the findings will be of use to all scientific and management bodies (ICCAT, GFCM/FAO, IUC, ICES, STECF), in that they will help to tailor current management schemes through the assessment of the true status of the stock(s) and also to revise and enhance conservation measures.
The tendered MedBlueSGen project aims to: